Your vey own anchorage

With the anchor secured in the sandy bottom and the stars above you.

Offshore anchorages are wonderful, for those who like the privacy that it gives you. The large bay on the island of Dhokós is one such paradise. It is mostly peaceful because the island lacks buildings, umbrella drinks and disco music.

However, there is a herd of goats with bells. They ping in and out of the waterhole by the beach chapel with the regularity of the factory worker at an old-fashioned time clock.
The starry sky is also beautiful, undisturbed by light pollution. The big stars are anchoring lights in the masthead of any eventual boats sharing the silence. The little owl, the dwarf Otus Scops whores its monotonous sound.

The starry sky is also beautiful, undisturbed by light sources. The big stars are anchoring lights in the masthead of any eventual boats sharing the silence..

We lie on the foredeck in the warm night and look for satellites. In the dark, an aeroplane making its way to reality, far away in another time and pace. To where we will return, in time. 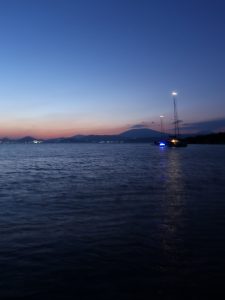 Find your very own anchorage

Offshore anchoring under the starry sky is something you should try at least once.

Read More »
We use cookies on our website to give you the most relevant experience by remembering your preferences and repeat visits. By clicking “Accept”, you consent to the use of ALL the cookies. However you may visit Cookie Settings to provide a controlled consent.
Cookie settingsACCEPT
Manage consent

Any cookies that may not be particularly necessary for the website to function and is used specifically to collect user personal data via analytics, ads, other embedded contents are termed as non-necessary cookies. It is mandatory to procure user consent prior to running these cookies on your website.

Undefined cookies are those that are being analyzed and have not been classified into a category as yet.

Performance cookies are used to understand and analyze the key performance indexes of the website which helps in delivering a better user experience for the visitors.

Analytical cookies are used to understand how visitors interact with the website. These cookies help provide information on metrics the number of visitors, bounce rate, traffic source, etc.

Advertisement cookies are used to provide visitors with relevant ads and marketing campaigns. These cookies track visitors across websites and collect information to provide customized ads.